Between Inequality and Discrimination: Is There Something Wrong With Northern Science?

Racism is back in town. Does science contribute to it? Or can it dissolve it?

“The global North and South and their difficult relationship and how to get on equal terms.” This was a major topic at the World Conference of Science Journalists 2017 in San Francisco (WCSJ2017), echoed by many sessions. 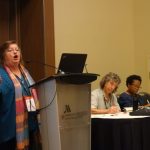 Ms Smallhorne framed the subject by pointing out that most of the science is done in the global North. In Africa’s history, it had been used to impose imperial efficiency in the colonial administration. However, science by definition and practice should be inclusive, embrace the different regions of the world and languages, as well as express respect for others.

In the same session, South African student journalist, Sibusiso Biyela, shared his experience on writing about the MeerKAT telescope. Language matters and makes the difference. When he wanted to translate the English version into Zulu, his native language, Sibusiso found out that to make it comprehensible he needed to rewrite the story.

Sibusiso suggested writing “decolonizing” with an “s” as a reference to the spelling in the British language and the impact of British rule on the continent. He showed participants a slide with Nelson Mandela and a quote that “the white man regards the universe as a gigantic machine hurtling through time and space to its final destruction,” while Africans regard it as a “composite whole,” an “organic entity, progressively driving towards greater harmony and unity.”

This applies to other regions as well. Indian science journalist, Padma Tata Venkata, called on the rich science history of her country, which unfolded over five millennia. It centred, among others, on health issues with Ayurveda standing for a healthy life. Modern western science and agriculture have not improved nutrition which suggests that the old traditional ways were more robust and might need to get reactivated. 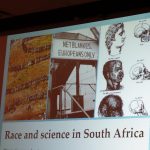 In another session about science and science journalism in Latin America, Federico Kukso from Argentina, also a newly elected board member of the WFSJ, expanded on Zika. The infectious disease had been around the Americas for quite some time and was well-known long before it moved north and became a big issue in the United States. “But nobody had asked us about our knowledge,” Federico regretted. In his view, the distinction between North and South is absurd. “Simply, there is no North or South in the Universe,” he said.

Inequality does not only refer to ethnic groups and regions, but also to gender. A testimonial of this was delivered by Naledi Pandor, the South African Minister of Science and Technology, during a very well-visited lunch session. Less than five percent of the doctorates in her country are female, she said. Recently, when she only hired women for various positions, males protested. Interior discrimination is being topped by unfair exterior treatment, especially from the North. “We need more real partnerships in international relations,” demanded the South African science minister.

Another distinguished speaker on this topic was Princess Sumaya bint el Hassan of Jordan, Chair of the  World Science Forum 2017. “Science is the key to peace, health, and prosperity,” she said. The results need to be shared like in a family. “Research foundations who don’t want to do this should not be here,” the princess expressed.

SCI:COM Ireland 2017 Media Event in Dublin: The Role of Media in Fostering Collaborative and Participatory Dialogue With Science