WFSJ board member, Wolfgang Goede, participated in the Public Communication of Science and Technology (PCST2018) that was hosted at the University of Otago in Dunedin, New Zealand (4-6 April). One of the main subjects discussed was ‘How to engage lay people in science?’ The answer: ‘Don’t lecture, rather play with your audience. Be creative and artistic. Make attendees participate and connect with each other. Let them become emotional.’ There are some valuable lessons for science journalists in this as well. In his article, Wolfgang shares some of the highlights from PCST2018.

THE POWER OF STORIES

At this years’ PCST a special emphasis was put on how to utilize the arts to connect science and society. As PCST President Brian Trench claimed in his opening speech before more than 400 participants present from around the globe, telling stories is an important part of this. 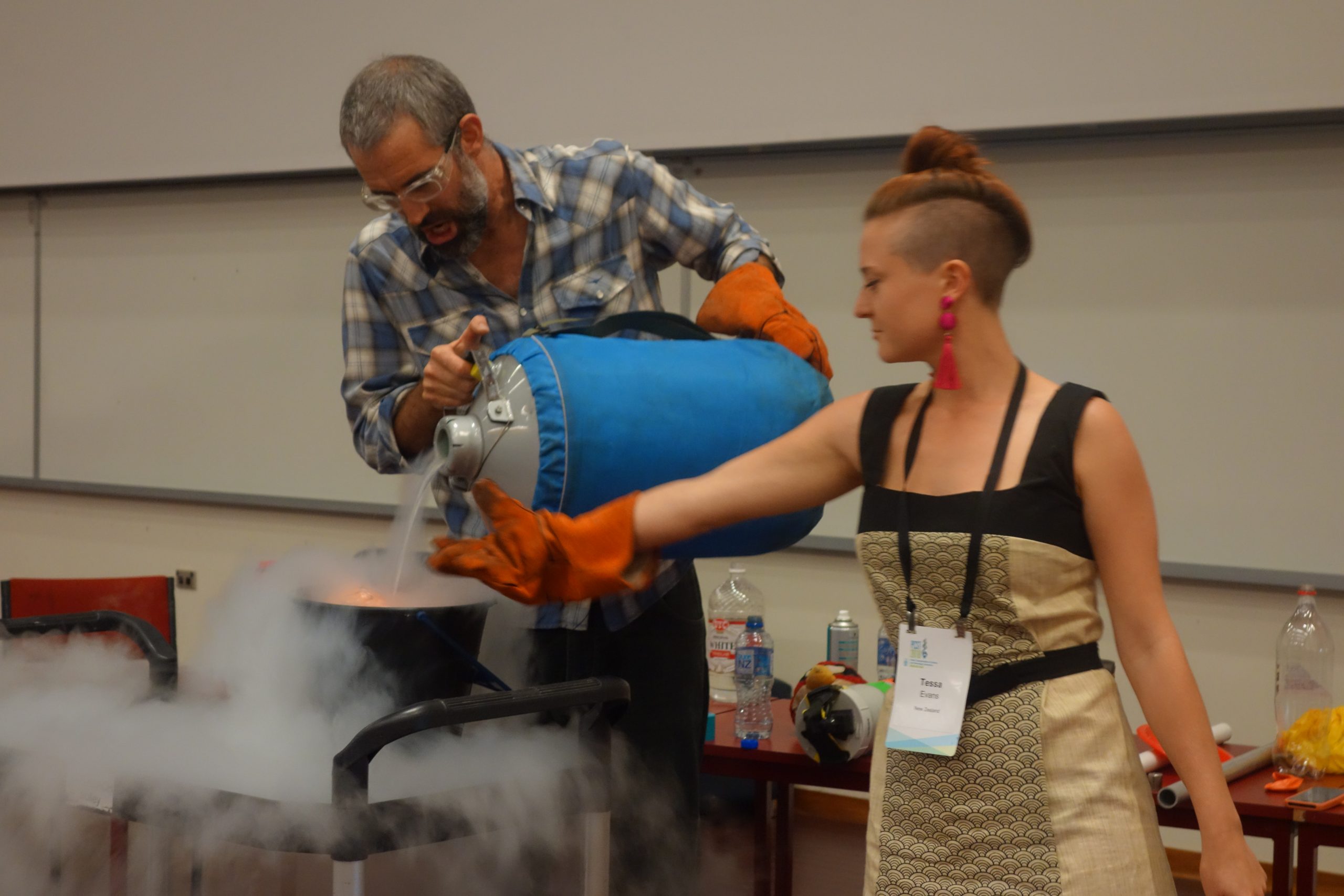 In numerous workshops, methods were presented how to engage audiences by their hearts with facts and figures. Not only storytelling but comics, poetry slams, drama connects science increasingly with the society. A rather new category in this is science cabaret. In a show, the Spanish group Big Van presented the art and power of comedy and jokes.

As an example, Oriol Marimon explained with many scientific details why “the technique to start a fire remains the most important invention of mankind ever”. Then he had volunteers simulate the making of fire by only utilizing the grunts of apes as explanations. So instructive and so funny that it sticks in your mind.

His colleague Helena González pointed out that “science is far from perfect”, with many shortcomings in pharmaceutical research, especially for females. This is where satire and parody come in. They expose the negative side-effects in the search for new drugs.

Big Van participates in the PERFORM project financed by the European Union. It is all about communicating science and innovations through performing arts such as stand-up comedy, science busking and clowning. The goal is to inspire STEM education (science, technology, engineering, and mathematics).

At a UNESCO event this summer in Paris, PERFORM will present new shows designed by students, communicators, teachers, researchers in Spain, France, UK. “Join us and celebrate a new era of science”, invited Helena the session attendees.

In another workshop, the Otago researcher Wiebke Finkler had convened a universal perspective on arts and science. Robert Inglis, director “Jive Media Africa”, quoted Einstein with imagination is more important than knowledge: “Logic gets you from A to B, imagination everywhere else.”

Robert pointed out that comics use emotions, produce identification, cause dialogue and by and large are a powerful medium to engage. Another medium he advocates very strongly is music and hip-hop.

He demonstrated examples of young Africans who write lyrics about health issues, incorporate them into hip-hop and with their art strengthen anti-HIV campaigns. Other panellists introduced science festivals, how they reactivate indigenous knowledge and shelter endangered species. A leading force in this is the Perth Festival. 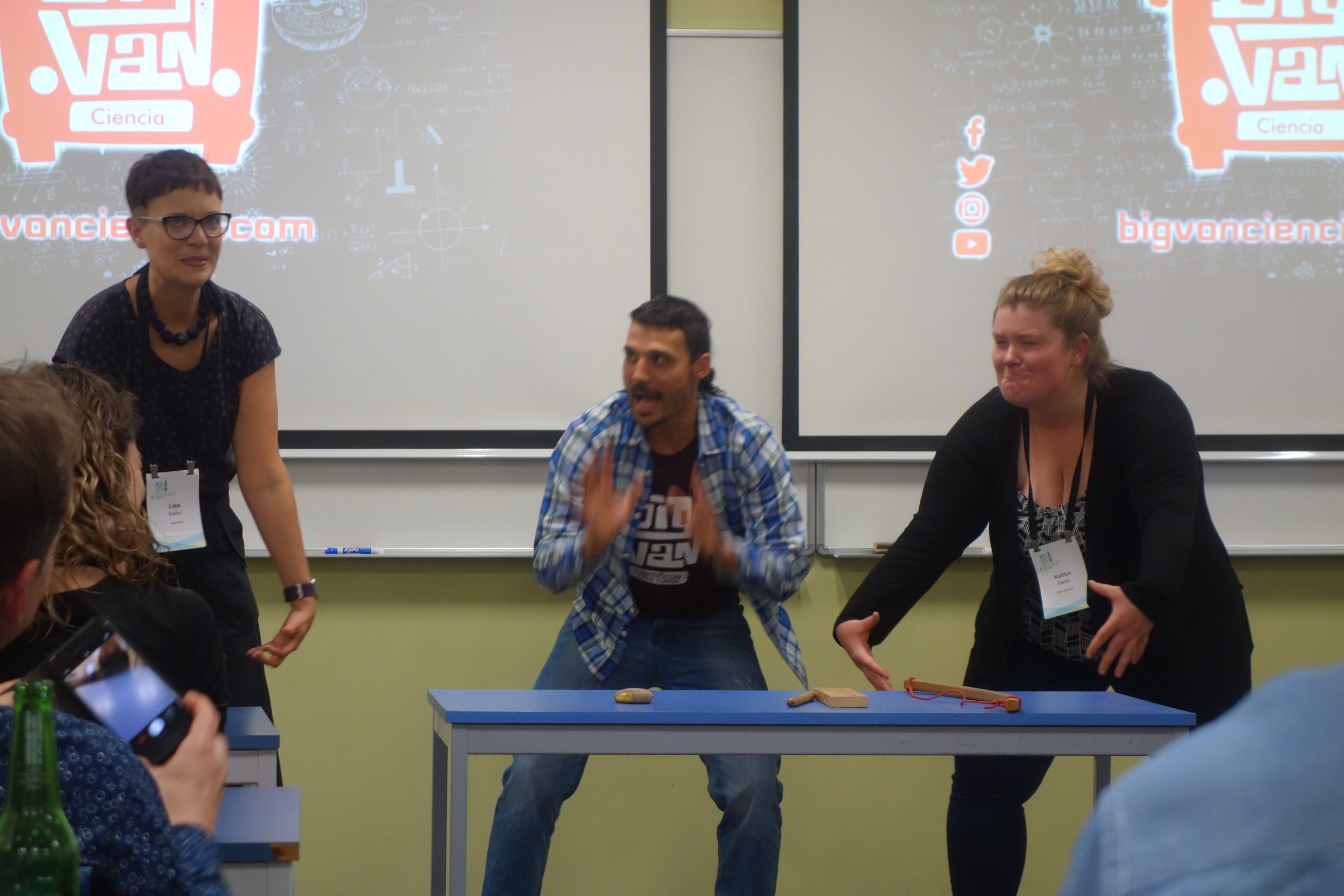 Wiebke went on to explain the narrative qualities of films. With a message for perfectionists: Too much professionalism can turn off potential viewers. She outlined viral videos. Not edited, shaky and thus generally more authentic and believable. Again, emotions cause more identification than facts. “Stakeholders as interviewees and speakers have more impact than scientists”, Wiebke expressed (Source).

Bronwyn Bevan, University of Washington, presented impact studies. Young people hang out with Instagram and Snapshot, but not Facebook, which they consider a medium for old people. “They would not communicate science via social media because this would make them look like nerds”, Bronwyn said about her investigations.

Helpful to know for both, communicators as well as journalists: If you are critical about science you engage people, Bronwyn has found in her studies. Being too positive, too much of a cheerleader of the dreams and hopes of science your audience becomes suspicious.

Your better strategy: Become creative and juggle with the arts and the genres. If you are a writer, but science journalism is too dry for you and science-fiction too speculative, experiment with “fictional science journalism”, based on real science and authentic societal issues, mixed with fiction (Source). May raise your reader goosebumps.

Another very well accepted format in Kiwi country was delivered by the Finnish delegation. Mikko Myllykoski, director of the Helsinki Science Center Heureka, presented a confession session. Participants confessed mistakes they had committed in their careers and discussed how to avoid them. Language and semantic problems, for example: Know the difference between “baton” (penis) and “matraque” (a club)! Not to forget, the session is only authentic with the throwable microphone.

For the organizer, Satu Lipponen the confession session teaches us how to disrupt standing routines. “Prevailing top-down formats don’t include the participants”, she regrets. “We need to deconstruct this and replace the ‘I mode’ with a ‘we mode’” (Source), as already introduced at PCST2016 Istanbul with a specific toolbox (Source).

So, finally, “what has all this to do with science journalism?”, asked a colleague. A lot! Because the boundaries between communication and journalism have become blurry and an increasing number of sci journos wear multiple hats to make a living. In an account of this, some science journalists’ associations have changed their names, welcome writers and communicators and even don’t use journalism anymore.

This was the topic of a roundtable which former World Federation of Science Journalists WFSJ board member Kathryn O’Hara had convened. As Sharon Dunwoody, professor for mass communication at the University Wisconsin-Madison introduced: “There is anxiety out there, with the landscape changing, overlap with what folks are doing these days, lots of slicing and dicing”, she said.

Then PCST president Brian Trench took the floor. He criticized the “polarization between cheerleaders and watchdogs”. “We all need to work together, rather than patrolling each other and separate”, he exclaimed.

“There must be no bitterness, but ‘betterness’”, Brian demanded: “Most of us are playing different professional roles and we must respect our societal role.”