The Potential Dangers of the Data-Driven Approach of Science Reporting

The Fonds de Recherche du Québec (FRQ) financially supported two Montreal students to attend WCSJ2017 in San Francisco. One of the students, Rémi Toupin, shares in this blog post his experience with some of the sessions he attended.

The 10th World Conference of Science Journalists (WCSJ2017) held in San Francisco is the occasion for more than 1,300 science journalists and communicators to gather and discuss topics such as new horizons in science coverage, storytelling and reporting of news around climate change or health issues. It has been an opportunity for me to meet those contributing to bridging science, technology and society.

Since my arrival, I mostly went to sessions covering data or environmental issues, or aiming at a critical approach of science journalism. The speakers in those sessions brought forth a lot of information, contributing to rich discussions, but the most striking facet of the conference for me is the trend toward data-driven approach of science reporting. 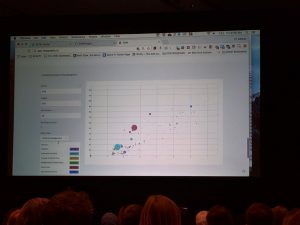 Though this course of action has the potential to bring new perspectives, we must be aware of a few dangers working this way, them mostly being about the meaning of data on one side, and the context of production on theother side. Indeed, data are empirical representations captured to get an understanding of the natural or social phenomenon, and as such can’t be detached of the social conditions surrounding their production and use. Therefore, if we are going toward data-driven approaches of reporting about science, we must also keep in mind some human elements, that is we have to consider the choices that are being made in order to get this data. We must be able to assess where it comes from, how it has been produced, why this data and not another – in summary, we must not use data-driven approaches blindly, and we must always be able to look at data to know its context of use and production and the underlying meanings behind it. If we are to go toward such a way of communicating science, we must also be aware of its limits. This is one of the areas where communication between journalists and social scientists, especially those working on data sociology, philosophy and epistemology, may help build ways of talking about science and technology to a broader audience.

Going to Berkeley on Sunday, I plan to build on this reflection, especially the way data is used to communicate about climate change. Looking forward to this last day of sessions and plenaries before going back to Montreal.

Rémi Toupin is the coordinator of the Laboratoire de communication mediatisée par ordinateur (LabCMO) at UQAM in Montreal, Canada. He attended WCSJ2017 in San Francisco on a scholarship funded by the Fonds de Recherche du Québec (FRQ)

Moving From Research Career Into Science Writing: Lessons From Ireland and UK

WCSJ 2017 Workshop Testimonial: How To Report About Infectious Diseases Such As Zika?