WFSJ’s vice-president, Milica Momcilovic, represented the Federation at this year’s Kavli Prize Week 2018 in Olso, Norway (1-6 September). It is an immense honor for the WFSJ to be able to participate in this six-day event. We are also grateful to The Norwegian Academy of Science and Letters, the event organizers, and the Kavli Foundation for their commitment and support to science journalism. Since 2012, 23 fellows – science journalists from all over the world – have had the unique opportunity to attend and report on the excellence in science from Norway. 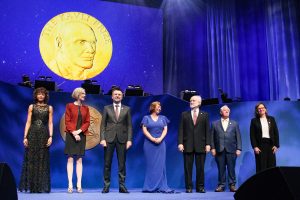 This year marks the tenth anniversary of the prestigious Kavli Prize, a biennial celebration of science, which recognizes scientists for major advances in three research areas: astrophysics, nanoscience, and neuroscience – the biggest, the smallest, and the most complex.

Given in the fields of astrophysics, nanoscience, and neuroscience this year’s prizes honor scientists who studied molecules in space and illuminated the life cycle of stars and planets developed a tool to precisely edit DNA, and unlocked the neuroscience underlying human hearing.

“These laureates represent truly pioneering science, the kind of science which will benefit humanity in a profound way. They will inspire both current and future generations to continue searching for answers to some of the most difficult questions of our time. Through their hard work, dedication, and innovation, they have strengthened our understanding of existence.” – Ole M. Sejersted, President of the Norwegian Academy of Science and Letters.

The Kavli Prize Laureates received their prizes from His Majesty King Harald V at a remarkable award ceremony in Oslo Concert Hall.

Shedding light on the Origins of Stars, Planets, and Life: The Kavli Prize in Astrophysics was given to Ms. Ewine van Dishoeck for her seminal work on revealing the chemical and physical processes in interstellar clouds, where stars and planets form. Her work has contributed to a breakthrough of astrochemistry, demonstrating how molecules form and evolve during the transformation of a cloud into stellar systems like our own.

Inventing a Scalpel for the Code of Life: The Kavli Prize in Nanoscience was shared between Emmanuelle Charpentier (France), Jennifer A. Doudna (USA) and Virginijus Šikšnys, Lithuania. They received the prize “for the invention of CRISPR-Cas9, a precise nano-tool for editing DNA, causing a revolution in biology, agriculture, and medicine”.

Unlocking the Mystery of Hearing: The Kavli Prize in Neuroscience is shared between A. James Hudspeth (USA), Robert Fettiplace, Great Britain and Christine Petit, France. They received the prize “for their pioneering work on the molecular and neural mechanisms of hearing”.

“On the prizes’ ten year anniversary, we have now had an immense honor of celebrating 47 extraordinary scientists. Our laureates have advanced science for the good of all humanity and at the Kavli Foundation that has a special meaning. Our core mission is to advance science for the benefit of humanity and much of this mission is realized through the worldwide community of Kavli Institutes doing basic research. Through this research institutes, we routinely witness the drive, imagination, risk-taking, and determination needed for pioneering science.” – Rockell N. Hankin, Chairman of The Kavli Foundation 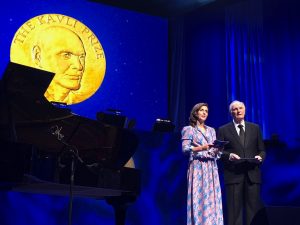 The American actor Alan Alda and the Norwegian actress and Heidi Ruud Ellingsen co-hosted the ceremony. The gala performance united science and culture in an event including a broad range of musical expressions featuring young artists, such as Adam Douglas singing “Try a little tenderness”, introducing Nano-science laureates and Solveig Slettahjell & Mosaic performing ”Crazy”, announcing Neuroscience laureates. [Also, watch the short video here with Mr. Alda in which he emphasizes the importance of science journalism.]

The day before the award ceremony, in front of a live audience at the University of Oslo, Kavli Prize laureates were joined in engaging talks about their work. The interviews, carried out by two of Britain’s leading science journalists, Vivienne Parry and Adam Rutherford, helped the audience gain a deeper understanding of the laureates and their award-winning research.

The astrophysics laureate and president-elect of the International Astronomical Union (IAU), talked, among other things, about the importance of drawing young people into science. She also stressed the importance of working together, across countries as well as across disciplines. Two of the three nano-science laureates, answered a wide range of interesting questions about their work, including about potential implications of the use of the CRISPR-cas9 within medicine, while the neuroscience laureates, shared their insights on the mechanisms underlying hearing, and warned about the danger of hearing impairment by over-exposure to noise.

SOME THOUGHTS ON THE KAVLI PRIZE

“Overall, I’m satisfied that the public understands the benefits of the CRISPR-Cas9 technology, that it’s transformative for research and development and for our own well-being. And actually, the media treat the field very well. There has been some hype with regard to the danger of the technology, some of which was not really justified. But overall, the media have highlighted the benefits and the fundamental research origin and potential of the technology. ” – Emmanuelle Charpentier winner of the Kavli Prize in Nanoscience

The Norwegian Government’s Banquet at Oslo City Hall, hosted by Iselin Nybø, Minister of Research and Higher Education, was a very special event, among the 550 guests were many researchers, government officials, representatives of scientific institutions and WFSJ delegation. 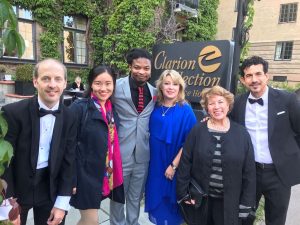 A Kavli Prize Week for 2018 WFSJ fellows, Ling Xin (China), Angela Posada-Swafford (Colombia/USA), Simon Pleasant (Japan/Australia), Ivan Carrillo (Mexico) and Sibusiso Biyela (South Africa) was particularly inspirational and in many ways a privilege for science journalists. In a casual atmosphere, fellows could hear the laureates explain their pioneering research, listen to their lectures in Oslo and Trondheim and participate in all events. Simply, it was one unforgettable week! In this blog post, our five fellows look back on their 2018 Kavli Prize Week experience.

Looking back on the 2018 Kavli Prize Week in Oslo. Our fellows share their impressions.

Next #ScienceTalks on ARM & Journalism. Tuesday 22 January at 11 am EST. 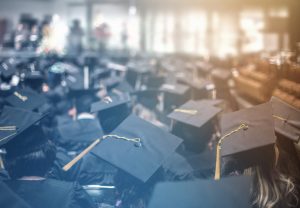 Do you need a science degree to be a science reporter?