WCSJ 2017 Workshop Testimonial: Food Waste Reminds Of An Impressive Advertisement On The Train

At the recent World Conference of Science Journalists (WCSJ2017) in San Francisco (26-30 October 2017), the WFSJ produced two pre-conference workshops and sponsored by the Research Councils UK on Feeding the World: Achieving Sustainable Agriculture and on Emerging Infectious Diseases: Post Zika in Latin America and the Caribbean.

The participants from Vietnam and Brazil share their experiences in two articles. The article below on the Feeding the World workshop was written by the participant from Vietnam. Read the Brazilian’s testimonial on the Emerging Infectious Diseases workshop here.

Food waste reminds of an impressive advertisement on the train

The workshop “Feeding the World: Achieving Sustainable Agriculture” was very useful to me because of the diversity of participants and speakers, the inspiring presentations as well as interesting agricultural initiatives showcased by the Horticulture Innovation Lab.

Based on the group discussions and sharing of information among the 20 attendants from Asia, Africa, and Europe, their countries face similar food security problems like in Vietnam, such as climate change (unexpected droughts and heavy rains), food waste and soil degradation.

Regarding food waste, it reminds me of an impressive advertisement on the train from San Francisco International Airport to the hotel, which illustrates ugly and colorful fruits with cheap prices. When food in developed countries are discarded by sellers and consumers due to its small size or being left to spoil, other food in developing countries could not reach the market because of low harvest technology, inconvenient transportation or bad processing.  Consequently, one-third of the global food production for human consumption per year – about 1.3 billion tones – has never reached the table of any family. Today, about 1 billion of people are hungry. 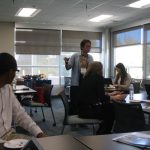 Food waste and food loss can be reduced when connections among stakeholders are strengthened. Professor Mark Lubell, director of the Center for Environmental Policy and Behavior at the University of California, Davis, highlighted the dynamic of the extension 3.0 agricultural network when farmers and consumers play a more active role in the interaction with other stakeholders such as environmental groups, scientist and producer groups. This ever-increasing network can be deeply reported or featured with different angles based on the Agricultural Reporting Framework of Mr. Harry Surjadi, Founder and director of the Society of Indonesian Science Journalists and Agricultural System Diagram (2015) of Dr. Wayne Caldwell.

Finally, I would focus on several sustainable agricultural practices of the Horticulture Innovation Lab with the aim to reduce food waste in processing. For example, it is chimney solar dryer which can be made by local materials and have a higher speed of drying compared to other designs. This dryer cost about 75-150 USD and has been successfully applied in developing countries such as Guinea, Thailand, Bangladesh, Cambodia and others. The other is DryCard which help farmers to assess their food dryness with low price. These examples give me a better understanding how technology initiatives can address challenges of food waste, and then lead to sustainable agriculture.

WCSJ 2017 Workshop Testimonial: How To Report About Infectious Diseases Such As Zika?