Since its inception in 2015, the Somali Media for Environment, Science, Health and Agriculture (SOMESHA) Green Journalism Awards have honored several professional journalists for their distinguished reporting on science topics and civic issues.

In 2016, the Award went to the Mogadiscien Star FM radio station’s Director, Mr. Ismail Sheikh Khalifa. On August 24th, 2017, he received an award from the Horn of Africa Regional Director of the United Religions Initiative (URI) during the Somali Youth Workshop for Peace event at the Afrik hotel in Mogadishu.

The Green Journalism Awards is an ongoing project awarding journalists every year with the goal to empower quality journalism. This year, the award was given to Mr. Abdirahman Noor Ali, a professional journalist reporting on science topics and peace issues nationwide. 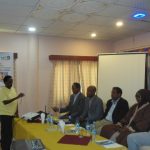 The award process allows SOMESHA to make new connections and helps develop traditional science, environmental and agricultural journalism throughout Somalia and beyond.

“Though SOMESHA is currently a member of the World Federation of Science Journalists (WFSJ) and of the International Federation of Agricultural Journalists (IFAJ), we are thrilled to spread our activities and do whatever we can to assist our members via our global and regional affiliations,“ said Mr. Daud Abdi Daud, the SOMESHA General Secretary.

The Somalian Minister of Information and Public Awareness, H. E. Eng. Abdirahman Omar Osman, was the guest speaker at the 2017 awards ceremony and thanked SOMESHA and its global affiliates for their quality support to Somalian media professionals.

Somalian journalists can already apply for the 2018 award.