Omar AL-Hayani, a science journalist from Yemen and a board member of the Arab Science Journalists Association (ASJA), reports on a three-day training project that was launched this April for 125 journalists covering environmental issues, climate change and the future of renewable energy.

“Training workshops on the scientific press and coverage of environmental issues, climate change and renewable energy are new to us in Yemen,” says Sahar, a Yemeni journalist who was one of the participants in one of the largest training projects of its kind in the country.

The project was implemented by local civil society organizations in collaboration with the Friedrich Ebert Foundation in Yemen. It covered five main governorates: the capital Sana’a, Aden and Taiz (south), Hadramout and Socotra (East).

During the past weeks, a total of three training workshops were organized in four governorates: Aden, Taiz, Hadhramout and Sanaa. 92 journalists were trained in scientific writing methods for environmental and renewable energy issues. They also focused on ways to simplify certain scientific concepts and terminology so that their articles would be better understood by readers.

The workshops also paid attention to building better scientific articles, on how to find press angles on issues such as the environment, climate change and energy and on how to write simple and attractive articles and reports.

Mr. Sahar Mohammed, one of the trainees, added that “the training workshop helped build my knowledge of the scientific press and its importance in contributing to raising scientific and environmental awareness in Yemen.”

The focus of global attention

Mr. Mahmoud Qayeh, a project manager for the Friedrich Ebert Foundation – Yemen Office, mentioned in a statement that the project “aims to empower Yemeni journalists and help build their journalistic capacity in covering scientific issues in general and climate change and energy issues, which is an important topic and concerns the globe. These workshops will contribute to raising understanding of climate change and renewable energy.”

The journalist’s task is to report on science in a simple and understandable way and to reinforce community awareness since most Yemeni citizens have been using solar energy in the last three years of the devastating war that Yemen is experiencing. “ 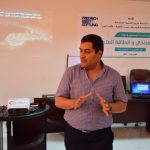 The trainer and science journalist, Omar AL-Hayani, used the WFSJ training guide during the workshops. Mr. Al-Hayani is a graduate of the 2010-2012 SCJOOP program, which targeted the Middle East and Africa and was implemented by the WFSJ in partnership with the Arab Science Journalists Association (ASJA).

The program is a practical training in writing scientific reports that include various academic lectures on climate change and related issues which were delivered by Yemeni universities’ professors.

Article by Omar AL-Hayani
Yemen, May 2018

Science Talks – An Educational Webinar Series from Wiley for Journalists